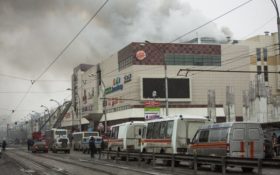 Police are searching for a gunman who opened fire at a Southern California strip mall, killing one man and injuring three other people.

Madden says a car pulled into the lot and the driver got out and began shooting into the crowd. The shooter then got back in the car and sped off.

Madden says one man died at the scene and three others were hospitalized. One was critical and the two others are expected to survive.

Investigators believe there’s just one suspect, but do not yet know the motive or the connection between the shooter and the people at the strip mall.